In the morning, we cruise down to the famous Soo Locks to see if we might glimpse any big ore carriers passing from one Great Lake to another, but alas we do not. Driving here, at higher speeds again, I once again notice the rear wheel vibration, and take the opportunity to inspect the tires. Reaching under the left-rear wheel arch and running my hand over the circumference of the tire, I find a distinct bulge in the tread, and can see a 6″-diameter distortion of the rubber: a classic case of terminal tread-separation. We’re in a rather pleasant waterfront park on a sunny morn, so Lorie puts her feet up and reads a book at a picnic table while I jack up the Vanagon and install the spare. 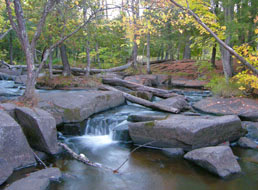 When we bought the van a year before, the previous owners had recently experienced a highway blowout and replaced the right-rear tire. Now the opposite tire is trashed. Subsequent online research will later confirm that the German frat boys from whom we bought the van had made the common mistake of installing everyday passenger-car tires on the Westy, when light-truck or Load Range C or D are required. With the heavy rear-engine configuration of the Vanagon, and the added weight of the Camper package, conventional car tires will squirm like cheap sneakers on an elephant, and dangerously begin unravelling within several thousand miles. Upon returning home I will install the correct tires, which, besides vastly improving the handling, also offer superior wear.

We pass through Canadian Customs and across the St. Mary’s River, the short watercourse by which Lake Superior drains into Lake Huron. As we motor over the International Bridge and gaze down at the river, we ponder the fact that, so large is Superior’s capacity, the water flowing far beneath us flowed into and fell onto the lake’s vast surface nearly two centuries ago, and is only now making it’s way out. 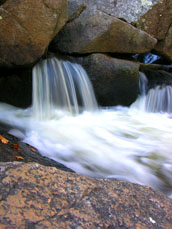 At the opposite end of the bridge, we stop for US Customs. Though we have no contraband, we cross our fingers and hope the Customs officers will not look unkindly upon our ‘hippie bus’ and see fit to give it a thorough inspection. To search through every nook and cranny, some of which even I have yet to discover, would undoubtedly take hours. But with one look at our undilated pupils and bland Midwestern faces, they wave us through after only a few pointed questions, and we motor south then west into Michigan’s Upper Peninsula.

This area is blessed with numerous beautiful waterfalls, dropping from the hard Canadian Shield spine of the Upper Peninsula to the rugged southern shore of Lake Superior, and we spend the better part of this day visiting several.

Nearly thirty years ago this month, just a few miles offshore of this point of land, a tragic day in Great Lakes maritime history occurred: the wreck of the Edmund Fitzgerald. Most know what little they do about the event through folk singer Gordon Lightfoot’s popular song memorializing the event, and it’s a pretty concise rendition of that disaster.

On November 9, 1975, the 700-foot bulk carrier (a hundred feet longer than the Irvin we toured in Duluth) slipped out of the Superior harbor and headed north, then east across Superior toward Sault Ste. Marie, her belly full of taconite pellets bound for Detroit. The next night one of Superior’s notorious early-winter storms arose and the Fitzgerald ran into forty-five-knot winds, and seas as high as thirty feet, so she headed for the protection of Whitefish Bay, just east of here. 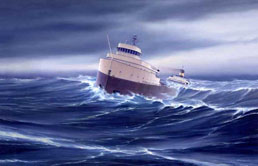 No one knows for certain what happened, but at some dire moment that night the Fitzgerald began taking on water. The captain of the “Fitz”—and those of several other freighters out on the lake but fortunate enough to be out of the worst of the weather—proclaimed it the worst storm he’d ever encountered. He reported that the ship had lost both radar units and part of her ballast pumping system, and was severely listing. Another nearby freighter joined the Fitzgerald to provide radar guidance and to accompanying her to the safety of the harbor, fifteen miles distant.

“… how are you making out with your problem?”, the other captain asked via radio.

“We are holding our own,” replied the captain of the Fitzgerald. It was the final word from the ship, and she soon disappeared from all radar. The entire crew of twenty-nine went down with the ship, which now lies broken in two large sections in 530 feet of water.

Some blame defective cargo hatch covers, which allowed the huge waves which broke over the deck that night to flood the Fitzgerald’s holds. Others point to faulty or damaged ballast-tank vents, which prevented pumping sufficient to keep her afloat. Still others hint that she may have earlier struck a shallow shoal off Michipicoten Island, near Lake Superior Provincial Park, causing an unseen and fatal breach. Even after all these years and numerous investigations regarding the exact cause of the Fitzgerald’s tragic and deadly loss, answers are not forthcoming, and details remain as murky as the dark depths of Superior.

We cross the Two Hearted River, which lends its name—if not its actual geographic location—to Ernest Hemingway’s novel, “Big Two-Hearted River,” set in the nearby logging town of Seney, Michigan. A lovely backwoods shoreline drive west from Deer Park brings us to a quiet, virtually uninhabited campground in Lake Superior State Forest, where we make camp just in time to watch the sun descend on a placid forest lake.