A Superior State of Mind, Day 12

Over breakfast in a small diner overlooking L’Anse’s lovely namesake harbor, we peruse our gazetteer, then head southwest into the Ottawa National Forest. Encompassing 14,000 wooded acres of rugged and rocky wilderness, the Sturgeon River Gorge Wilderness unit is bisected by the Sturgeon River as it makes its way twenty-five miles northward to empty into Lake Superior. The Vanagon bumps along the dirt and sand forest roads, nimbly dodging the numerous bear hunters parked on the roadsides fiddling with the remote controls for their hound dogs (doesn’t seem very sporting) and we disembark at a trailhead. 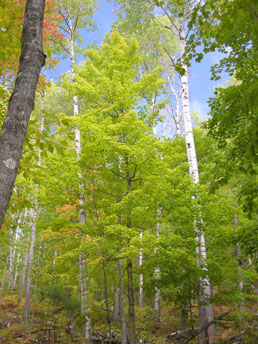 Propped against the base of the sign declaring the various trails which depart from here, there is a handmade memorial of sorts, poking above the weeds. It is an eight-by-ten picture frame, and beneath the glass—sun-faded, water-wrinkled, and lightly speckled with mildew—a hand-scrawled sheet of paper reads, “DANGEROUS CLIFFS! While walking our dog here on May 19th he ran off and fell over an UNMARKED CLIFF. He broke his neck and died! Please BEWARE, and don’t let this happen to YOUR beloved friend!” Near the bottom, the epitaph concludes with, “In memoriam Poochie, 2005”. Or Poppins, or Diggity, or Mr. Snuffles, or whatever the name was.

Undaunted, and unburdened by clumsy canines, we proceed onward with dogged determination. We begin our descent a mile or so down the switchbacked trail into the gorge, skipping merrily around freshly fallen and aromatic horse apples, the sound of roaring water growing louder and larger. While there are indeed a few impressive ledges and dropoffs along the way, there is hardly anything worth calling a cliff here. And if the ample horse droppings are any indication, one wonders just what sort of a dog was unable to navigate a reasonably uncomplicated footpath frequented by half-ton pack animals. Not to seem unsympathetic, but perhaps the dog world is all the better for the absence of such inept and undexterous representatives as the ill-fated and unfortunate Pugsley. Or Scooter, or Scamp, or whatever the name was.

Though I myself am off-leash today, I obey all of Lorie’s voice commands and thereby manage to avoid tripping over my own feet and go careening off into the thin, pine-scented air to plummet to my death, and we soon arrive safely at Sturgeon Falls. 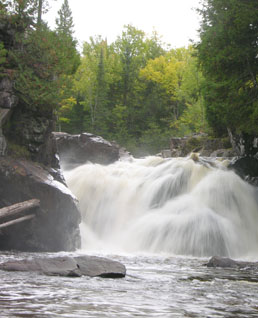 The river has carved a 300-foot-deep canyon in the region’s volcanic bedrock here, and it rushes through a steep and narrow chute before crashing spectacularly over a twenty-foot ledge. We sit at the base of the falls, taking in its impressive and eternal power, and enjoy a trail snack while letting the spray from the falls drift over and cool us. Finally refreshed, we climb the steep gorge trail to the Westy and return to the head of the harbor, where we catch US 41 at Baraga and continue north onto the Keweenaw Peninsula.

Counterintuitively, and for reasons unknown, the name of this place is pronounced KEY-wha-naw, suggesting that during the anglicization of the Ojibwa word, one of the ‘e’s got misplaced. In any case, it means “place we cross over”, in reference to the easy canoe route across the peninsula, which saved about 90 miles of open water paddling around the peninsula.

If it is true that the northerly neighbor states of Wisconsin and Michigan, when seen on a map, resemble a slightly mismatched pair of mittens, then the Keweenaw is where the friendly state of Michigan’s upper peninsula delivers to the world a hearty thumbs-up, visible even from outer space. This great projection of land arcs sixty miles out into Lake Superior from the northwest corner of Upper Michigan, and its bony skeleton is comprised of billion-year-old basalt. Even the massive mile-thick sheets of ice marching down from Canada couldn’t grind away this hard volcanic stone, and as the glaciers moved south into Wisconsin, the knifelike prow of the Keweenaw Peninsula split them and sent them slowly coursing around on both sides. Today these basalt ramparts still tower nearly a thousand feet above the lake, offering commanding views over the expansive surface of Superior and standing in mute testament to the steadfast forces of nature. 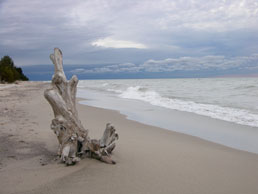 With its long natural and human histories, there is much to see and do here, so we stop in to the Chamber of Commerce visitor center in Houghton for some maps and other information. It’s already past the end of the summer season, the autumn leaves are a few weeks away from peak color, and a chilling wind blows in through the shipping canal. It’s pretty slow in the welcome center; it’s just us and the friendly woman behind the desk, who seems either worn out by the summer tourists or resting up for the upcoming fall-color rush. We select some maps and brochures, and indulge her invitation to sign the guest book; it’s nearly closing time and we are the third visitors on today’s page.

Crossing the big steel girder bridge, we swing west and follow the north shore of the portage canal several miles to McClain State Park, where we find a nice campsite mere feet from a sandy ledge overlooking the lake. The winds howling in off the vast surface of the water threaten to overturn our dinner plates, but we enjoy our supper at the picnic table as the sun sets behind Lake Superior.