A Superior State of Mind, Day 14

Though Fort Wilkins spent far more years in disuse and decrepitude than in active service, today it provides a remarkably clear view into life in a remote military garrison a century-and-a-half in the past. Thanks largely to an extensive WPA project in the 1930s, twelve of the original buildings dating from the 1840s have been beautifully restored to their former glory and are now maintained by the Michigan DNR.

After an early breakfast in camp we hike over to the fort, the rising sun slanting in over the lawn as we stroll the old rooms and boardwalks of the garrison. As a young park staffer unfurls Old Glory and sends her up the tall whitewashed pole, one can easily imagine the two companies of troops assembling on the central parade ground for reveille and roll call. 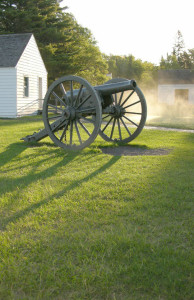 Life here was often harsh. The men (and the few women) who lived here were nearly completely isolated from the outer world and all its comforts. With no roads in the entire region, what food and supplies for daily life could not be grown or hunted locally was delivered by sailing ship. The John Jacob Astor, the first American commercial vessel to sail Lake Superior, was such a ship, and the two-masted wooden brig carried miners and supplies all around the Superior shoreline for ten years before meeting her fate here at Fort Wilkins.

On September 21, 1844, the Astor had just finished unloading supplies at the Fort when a sudden turn in the wind prevented her from leaving the harbor. As the wind increased, the Astor began to drift, dragging her anchor across the rocky bottom, and she was thrown up on the shore. Though the captain struggled to free her, it wasn’t to be, and her bones still litter the bottom of the harbor today.

We take a ride in a small boat out on the harbor today, skirting around the black reefs that throw up flumes of white spray, and out to the Copper Harbor lighthouse. Prompted partly by the wrecking of the Astor and by the plights of other ships trying to thread the narrow and treacherous harbor entry, mariners began complaining to Washington and in 1847 Congress appropriated the money to construct the lighthouse. In February of 1849 the first keeper arrived at the new station with his family.

Up until this time, the nation’s navigation aids had been under the jurisdiction of the US Treasury Department, with responsibilities for lighthouses falling to the Fifth Auditor. Stephen Pleasonton was a longtime government bureaucrat with no maritime or technical skill. Sourpussed and tight-fisted, he ran the program on a shoestring, and the lighthouses of that era reflect it: due to inferior construction materials and hurried workmanship many lasted only a few years in the harsh environments of the seashores and Great Lakes regions. By 1866 the first Copper Harbor lighthouse was so decrepit that it was declared beyond repair; it was torn down and a new one constructed in its place, keeping only the Fourth Order Fresnel lens from the original. 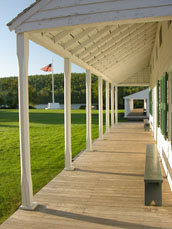 Our small tour boat putters behind the point on which the lighthouse sits, and we disembark at the same landing used by the lighthouse keepers who lived and worked here for over fifty years. Preserved in the same condition as it was at the turn of the century, the Copper Harbor lighthouse is now maintained as part of Fort Wilkins SP, and a History Department staffer guides us around the grounds and the Cream City brick buildings. The original oil-fired light in the forty-two-foot tower has since been retired, and a modern light installed on a steel tower alongside the old one, but it’s still easy to imagine the solitary and often desolate life led by those lonely lightkeepers and their families. “… beyond the most distant wilderness and remote as the moon,” statesman Patrick Henry told Congress after early mining attempts were abandoned in 1771.

Returning to the mainland, we enjoy the first of several fine meals at the Harbor Haus restaurant (watch for the billboards featuring beckoning German maidens and their delightful dirndls), as we watch bald eagles diving for fish in the harbor. We motor a few miles farther north to where US 41 ends in a quiet cul-de-sac (the southern terminus is eight states and nearly 2000 miles away in Miami), then continue beyond the end of the pavement on a narrow gravel road toward the far tip of the Keweenaw Peninsula. We turn off on a smaller gravel-and-dirt jeep trail for another mile through the lush, overhanging boreal forest, the fall colors now dripping with a cold rainstorm that has blown in off Superior, until we come to the trailhead into a Nature Conservancy Preserve (NOTE: this final section of ‘road’ may be rough and rutted, so drive slowly. The surface is mostly coarse crushed gravel, so traction is good even in the wet, and we had no great difficulty negotiating it with our 1983 diesel Westfalia). 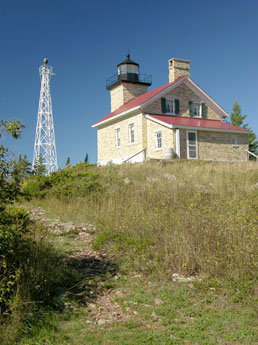 A short hike in the rain brings us to Horseshoe Harbor, a lovely and remote bay protected from the fierce lake winds by a veritable wall of uplifted 600-billion-year-old rocky ridges. While Lorie strolls the placid water’s edge, enjoying the myriad colors and textures of the gravel beach, I scramble up the protective natural wall, and am nearly thrown back down when the full force of the north wind hits me.

The view beyond the protection of the ridge reveals green waves ten feet tall rolling in off the jagged surface of Superior to spend their wind-driven power on the volcanic shore with resounding booms. As the water rushes back down the sloped faces, it forms new waves which surge back out into the lake, and when these meet with the next series of incoming waves, both crash together and leap upward twenty feet or more. All along this ancient wall of stone, the inland sea churns and boils, these waves having rolled for seventy miles across Superior before finally arriving here to deliver their final blows on the shore. I imagine the Astor or another unfortunate vessel from the days of the wooden sailing ships losing her anchor and being driven toward a rocky and desolate coast like this, and the struggle of the crew to steer her clear of certain foundering. Before the wind can shove me over the edge, I clamber back down behind the wall, cold and wet, my ears ringing in the sudden stillness. The Vanagon carries us back into town, where we warm up with a hot meal and drinks at the Harbor Haus.

As we enjoy our dinner, a rather peculiar gentleman at the next table asks the waitress about a place to stay on a future visit, and she helpfully provides the names of several nearby hotels. His interest piqued, he questions her further every time she returns to fill his water glass or to top up his coffee, and wants to know all about each place of lodging: their proximity to sites of interest, their comparative values, the relative thread counts of their percale pillow cases, the heartiness with which their toilets flush. And on and on it goes, each time the unfortunate waitress hustles past with an armful of dirty plates.

He is dining alone, so perhaps is more interested in the conversation and the company than in actual lodging, but clearly he has nearly exhausted the overburdened young woman’s knowledge of local hostelries, and she soon takes to hiding in the kitchen. So he now directs his attention to us. 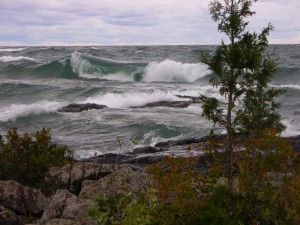 “So, where are you folks staying at?”

Lorie and I exchange sidelong glances, a sort of split-second staredown, which I handily win by inserting a forkful of rice pilaf in my mouth. I shrug and begin chewing.

“We’re camped at the state park,” Lorie graciously replies over her shoulder, her voice all sweet and syrupy, but her eyes casting daggers at me.

Despite her momentary puzzlement, Lorie manages to fix me with a silent glare, and her fingers twitch toward her steak knife.

“Well, I’m worried about them,” our nervous dinner companion replies. “Up here there’s bears and mountain lions. Wildcats. Badgers, too!”

I nod, a couple of buttered green beans poised just beyond my lips.

“There’s all kinds of very vicious animals. It’s a regular jungle up here,” he continues, glancing out the window with distrust. “Have you seen any wolverines?”

“No,” I admit. “But I saw a very ornery red squirrel yesterday …”

“Well, I wouldn’t be able to sleep outside with all those dangerous creatures out there, prowling around and stuff …” The waitress sneaks up behind him to furtively slip his dinner bill onto the table, but her escape is foiled when he begins to dispute the charges, and we are allowed to dine in peace.

We return to our campsite, and enjoy a restorative campfire to take the chill out of the air. But I cast wary glances toward the woods whenever I hear a twig snap, and we finally retreat to the relative safety of the Westy.