A Superior State of Mind, Day 2

Swinging north, we are soon in Bayfield, a quaint ‘seaside’ town perched on the shore of Superior. Bayfield built its early success on a sturdy three-legged stool which served it quite well, at least for the first few decades of its existence. In 1870 the first commercial fishery was founded, and within twenty years nearly 500 workers were employed year-round catching and processing the flavorful whitefish. The abundant northern forests inspired a large logging operation, and several sawmills soon sprang up along the shores of the bay. And the local brown sandstone proved to be a prized construction material desired for large municipal buildings across the upper midwest; examples may still be seen today in Duluth’s Central High School, the Milwaukee courthouse, and many others. All three local industries sent their goods out to the larger world via Great Lakes schooner. 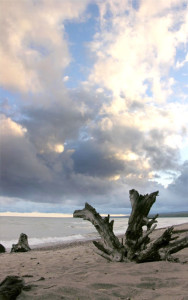 But the stool soon grew wobbly: rampant overfishing—combined with excessive logging and sawdust from the mills, which fouled the shallow spawning grounds of the whitefish—depleted the once-great natural fisheries here. And the growing popularity of new architectural materials such as steel and concrete undermined the brownstone industry, closing the quarries. But the rug was really pulled out from beneath the city when the two regional railroads selected nearby Ashland and Washburn as their terminal ports, further isolating the already-remote Bayfield from its distant markets.

Today, Bayfield’s primary export appears to be fudge. The excruciatingly enchanting town with a candy “shoppe” on every corner is this weekend crawling with tourists drawn to Bayfield for her annual Apple Festival. The place is packed with marching bands, street artists, crotch-nuzzling golden retrievers, impertinent jugglers, and endless numbers of wailing, stroller-bound children with chocolate-smeared faces. We briefly consider partaking of the apple pie, apple jam, apple butter, apple sundaes, apple chili, apple dumplings, or—most tempting of all—apple bratwurst. But instead we make for the ferry docks to escape the madding crowds. After purchasing tickets, we pull ahead and the Vanagon is escorted onto the decks of the ferry, the comparatively diminutive Westy jammed in among the large SUVs and trucks of our fellow travellers.

Bayfield is now considered the gateway to the Apostle Islands archipelago. Set aside by Congress as a National Scenic Lakeshore in 1970, the twenty-two islands which make up the Apostles offer a glimpse into a distant and pristine natural history visible in few other places. The layers of precambrian sandstone which once formed the ancient seabed here have now been uplifted and eroded by wind and water to form islands with beautiful and intricate cliff formations, spires, and sea caves. Due to their remoteness, and preservation by the Lighthouse Service, several of the islands still bear their ancient old-growth forests, and all are home to a diverse population of nesting and migratory birds and a variety of other wildlife.

Though once used for farming, logging, commercial fishing operations, quarrying, and other resource-extraction endeavors, the Apostles are today preserved for hiking, wilderness camping, sea-kayaking, sport fishing, and other recreational uses. History buffs will find a rich human past to explore here, from old stone foundations of farmhouses and a school, a small preserved fishing village, and nine historical lighhouses. 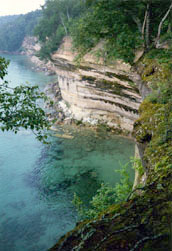 Our brief voyage across the waters of the bay soon brings us to Madeline Island, where we disembark at the tiny village of LaPointe. At just fourteen miles long and three wide, Madeline is the largest of the twenty-two islands making up the Apostles, and the only inhabited one. According to Ojibwa oral tradition, the people used to inhabit the Atlantic coast of North America. A shaman had a prophetic vision informing him that a race of fair-skinned invaders was coming soon to destroy them, and instructing the people to leave their homeland and migrate westward to a preordained island: “the place of the turtle”. Most of the Ojibwa clans heeded this warning and embarked on the centuries-long voyage up the St. Lawrence, struggling for survival against the strange lands and the war-like tribes they encountered along the way. Indeed, the single clan that stayed behind to greet the arriving Europeans were virtually wiped out by epidemics of smallpox, measles, and tuberculosis.

Unfortunately, there are a lot of islands in the Great Lakes chain which resemble turtles. So numerous arguments and rifts broke out among the exiled wanderers regarding their prophesied destination, with various factions dropping out along the way to settle in places like Lake Huron’s Mackinaw Island and others, while the main party continued here to finally settle on Madeline Island. As too often happens, however, things eventually took another turn as whites ultimately arrived here and compelled the Ojibwa to leave even their final haven foretold by the prophecy. Most now live nearby on the mainland, on a nice bluff overlooking the Apostles and their former promised land.

About 200 people live on Madeline Island year-round; another 2,500 come to stay only for the summer. LaPointe is the only ‘town’ of any size, with holiday homes scattered around the rest of the island. We motor about the perhaps thirty miles of roads criss-crossing the island, taking in the charming wooded lakeside scenes, then choose a site at Big Bay State Park. That night when preparing for bed, I see shimmering waves of colored light rolling silently across a portion of the night sky. Aurora borealis? UFOs?