In the morning Lorie and I drive over to the nearby parking and picnic area of the barrier beach, and share a big pot of Malt-O-Meal while watching the sun rise on Big Bay. We amble down to the sand, where we discover a lone stranger sprawled on the shore, wrapped in a blanket. Worried that it might be yet another victim of the many historical shipwrecks in the area, we hurry over to offer aid.

But as we approach, he stirs and sits up, blinking at his surroundings in great confusion and gazing dumbfounded at the blazing orange ball rising in the sky, as if seeing it for the very first time. It seems as though he is not from this world. I recall the mysterious shimmering lights I saw in the sky last night, and wonder if perhaps he is some wayward humanoid alien, a galactic traveller cast off on this distant terrestrial shore by his mutinous shipmates. I hope he doesn’t want to bum a ride; if he is accustomed to interstellar travel, he will be duly disappointed with the speed of the diesel Vanagon, which is barely inter-state …

We leave him to get acquainted with his new planet while we enjoy the short self-guided boardwalk tour through an impounded lagoon and peat bog, once part of Lake Superior but now separated from the lake by a coastal barrier spit. Designated a State Natural Area, a wide array of rare and specialized plants and animals inhabit this unique ecosystem and geological landscape.

We motor out of the park and drive to the north end of the island, then turn southward along the North Shore Road. I cannot recommend this route, as it is about ten miles of gravel, with dense forest on both sides and only rare, mere glimpses of the lake.

Even worse, I almost lost my socks. Though I have been on vacation only two days so far, the unseasonably warm autumn weather has instilled in my socks an aroma more common to, say, July or August. So last night, for the benefit of all parties, and to prevent my own mutinous exile from this good ship, I stowed the pungent things in the rooftop luggage bin. Now a brisk northerly sea breeze has inspired the socks to perform a quiet soft-shoed tap dance up there, so I niftily reach up and pluck them down before they break into a burlesque-style kick number and are lost forever. 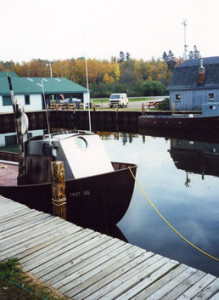 Long about, oh, a billion years ago, a major volcanic eruption sent lava and molten rock oozing out and covering this entire region. Then, just another 500 million years later, a series of violent earthquakes tore the place apart along what is now called the Douglas Fault, which runs from modern-day Minneapolis to east of Ashland. It is along this upthrust fault that several spectacular waterfalls are now located, including Amnicon Falls and several others we will visit. The afternoon is spent hiking along the riverside trails and scampering about the basalt ledges and water-carved steps of Amnicon. At night, nestled in the Westy, the constant roar of the falls is nearly enough to drown out the sound of the nearby highway …

A Superior State of Mind, Day 9