In the morning we make a short sidetrip south of the city of Superior to Pattison State Park, where we find Wisconsin’s highest waterfall, and the fourth highest east of the Rockies. At 165 feet, the waterfall was called Big Manitou by the native Ojibwa, who heard the voice of the Great Spirit in the bellowing and crashing waters of the Black River. At the base of the falls is a steep-walled gorge carved over the past 10,000 years. In the fall, chinook salmon swim several miles upstream from Lake Superior to the base of Big Manitou to spawn.

We return to Duluth for yet more shopping and kitsching. After lunch we finally turn onto Hwy 61 and head up the Minnesota North Coast into the Arrowhead Country. I am not sure whether it is called this because if one squints and holds the map kind of sideways, that part of the state resembles an arrowhead, or because of the many roadside trinket shops selling flaked stone ‘Indian’ arrowheads and spearpoints, all made in Thailand.

Fifty miles inland from this north shore of Lake Superior is the eastern end of the Iron Range, a hundred-mile-long vein of ore that has been producing mid-grade iron and taconite since the 1880s. Many of the towns along the lakeshore seem to exist only for the purpose of transferring countless tons of taconite pellets, carried down from the mines by rail, onto waiting ore freighters like the Irvin we toured in Duluth. Great ruddy ore docks extend into the arctic-green waters of the bays, from which the freighters are loaded, most bound for the forges and foundries of the lower Great Lakes.

We finally arrive in Grand Marais, MN, where we decide to take a room. We find a place just east of town which, in addition to the usual roadside strip motel, also offers quaint log cabins for the night. Their sales literature explains that the cabins were “Originally built in 1925 by Swedish settlers …”, and if our experience is any indication, the place hasn’t been cleaned since the Swedes moved out. Motoring the Westy back to a cabin, we climb the lopsided porch and enter to find the place colder on the inside than the evening air is on the outside. 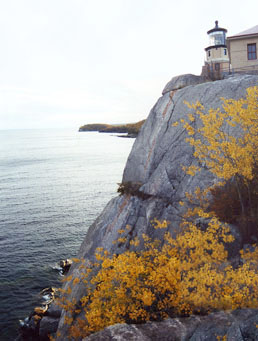 Split Rock lighthouse. It’s not very tall but it doesn’t need to be; perched atop a 170-foot granite cliff, it offers a commanding view of the lake. The keeper climbed the spiral stairs to light the kerosene burner for the first time in 1910, after a rash of serious shipwrecks on the rocks below. Ships’ navigation compasses were rendered inaccurate by large masses of iron beneath the lake.

Bothered by the niggling sensation that someone or something has just left the place upon hearing us arrive, I discover that the back door is hanging ajar, its lock mechanism ripped from the doorjamb and now unlockable. I jam a wooden chair under the doorknob and we resolve to make the best of it and start bringing in our luggage. But when Lorie throws back the bed linens and finds a couple of black curlies between the sheets, we hastily vacate the premises and collect our refund.

Returning to the crossroads of Grand Marais, we select another motel right on the main strip and I go in to inquire about a room. As in many motels, the front office is directly attached to the proprietor’s living room, from which I can hear what sounds like a marital dispute between a real-life Frank & Estelle Costanza. But in French.

Finally, upon my third dinging of the countertop bell, a slovenly woman appears in a dirty pink bathrobe and slippers, an ashy cigarette drooping from her lips.

“Yes …?” she snarls at me distractedly. I believe she was once quite an attractive woman, with short jet-black hair and a penetrating gaze. But every rose has its thorns, I suppose, and now she cannot hide her disdain for the world in general, and for inquisitive tourists in particular.

“Er, do you have a room available?” I ask brightly.

“YES!” she barks, as though it were the stupidest question ever.

“Off coorse,” she replies, blowing a grey cloud of cigarette smoke my way, “but eet ees zee last one.”

Her thick French accent and her sultry eyes tell me I’d better get while the gettin’ is good, but instead I ask for a key so that I might see the room first, to look for signs of forced entry and wayward pubic hairs. She throws it at me.

As I trudge out to the room, I wonder if the woman is the last desperate descendant of a French explorer or fur-trapper who refused to be driven out when the upstart Yankees claimed this land and sent them all packing to Canada. She lingers here now, taking our filthy American money and doling out surly attitude in return, the last of her dying race.

The “non-smoking” room looks fine, but stinks like a pool hall ashtray, so I politely return the key and leave, the ill-mannered Gallic peasant woman muttering dark words as I go. We finally find a nice, non-descript national chain motel nearby, and collapse gratefully into bed.