Today dawns to a cold, wet sleet. We hit the road early and the Vanagon’s tires soon thrum and hiss on the wet pavement. The highway veers closer to the shoreline as we enter Lake Superior Provincial Park, then heads into the interior of the park. The campgrounds are closed this late in the season, and the rain keeps us in the comfort of the Westy, but the weather cannot hide the beauty of the place. At 380,000 acres, the park encompasses many miles of classic Superior shoreline, dense forests, and ancient river canyons, with ample opportunity for backcountry hiking, camping, and whitewater paddling. 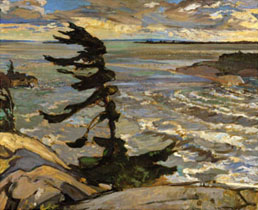 So beautiful is this region that it inspired a loose circle of Canadian landscape artists to work in the area in the 1920s. While many other artists and critics considered the Canadian wilderness an aesthetic wasteland, the Group of Seven, as they came to call themselves, found abundant inspiration here, and spent the next decade sketching and painting the captivating surroundings.

Strongly compelled by European Post-Impressionism, the group created colorful and bold interpretations of the striking land- and waterscapes to be found here, and their work, seen at prestigious exhibits and shows, cultivated a new and fresh approach to landscape painting which came to be known as the Canadian School. The group eventually disbanded, but their ideals influence landscape painting to this day.

Somewhere just south of Montreal River Harbor, we see our first moose—a stuffed one—alongside the road, presumably a tourist attraction for the nearby filling station. But as we approach on the highway, the taxidermied bull moose raises his head and bolts across the road in front of us, followed by his equally lively mate. As the bull leaves the pavement, he glares over his shoulder at me, straight in the eye, and I recall the words of the Wawa RV-park manager; this fella indeed looks as though he is inclined to crash right thru the windshield … 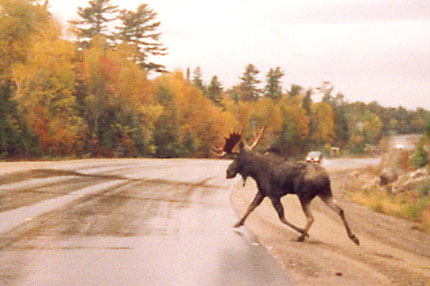 On the long, final run toward Sault Ste. Marie, I perceive a faint vibration emanating from the left-rear wheel. In retrospect, I seem to vaguely recall first hearing the noise a couple days ago, and the gentle thrumming has slowly grown since then. Hoping it does not indicate the imminent failure of a CV joint, I determinedly put my foot down and continue east and southward.

By nightfall we arrive in Sault Ste. Marie, and I cannot help but think of my voyageurs still out on the lake. Though we have covered the distance from Thunder Bay in just under nine hours of driving, those hearty souls are likely pulled up on a lonely shore and settled beneath a stand of cedars to stay out of the sleet for the night. It will be many days of hard paddling for them before they reach this place, and many more to Montreal beyond, bearing their load of furs for a rich man’s hat.

Making our own camp beneath the pines in a KOA campground, we pop the Westy’s top and enjoy a dinner of fresh-boiled rice and canned chicken while listening to the familiarly NPR-like Canadian Broadcasting Corporation, then turn in for the night.

A Superior State of Mind, Day 2

A Superior State of Mind, Day 14