Thanks to the dearth of campers here, or perhaps the abundance of wolves and fox, our sleep is not interrupted by mice, and we awaken rested and refreshed. A heavy gray pall has fallen over the place overnight, so the drive out from Bowman Lake is even more eerie than yesterday, the burned-over landscape alien and foreboding. We trace Bowman Creek down to where it empties into the Flathead River, then follow that back to West Glacier, where the Highline and its namesake railroad are separated by only a line of telephone poles. For the first time, we swing east now on Route 2, and trace the middle fork of the Flathead up toward the Divide. 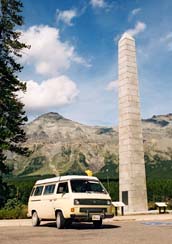 Aside from the Going-to-the-Sun Road, this is perhaps one of the most beautiful mountain drives of our voyage, the sun finally making its appearance and casting its warm morning light on spectacular views of the river coursing down through green and rocky valleys, the highway playing tag with the rail route of the old Great Northern.

We arrive at Summit, 5,213 feet above sea level, the lowest crossing of the Continental Divide north of Colorado, then cruise down to the Glacier Park Lodge. For many early visitors to Glacier, this was their first introduction to the park, and was the culmination of a two-day, non-stop rail journey from Chicago or Minneapolis on the famous “Empire Builder”. These luxury trains were the epitome of comfort, amenities, and speed for their day.

Upon arriving at the depot adjacent to the lodge, guests were treated to a final night’s sleep in a real bed before continuing into the park’s interior via foot, horseback, or the famous red “Jammer” busses. We stay only long enough for lunch in the lodge before resuming our drive to Browning, where we turn south to Great Falls.

When Lewis and Clark arrived here in 1805, their epic upstream journey was dealt a severe setback. First, Lewis found an eighty-foot precipice over which the mighty Missouri cascaded. Five miles above that was another fall, of about nineteen feet, then an even greater one, fifty feet high, then two more. 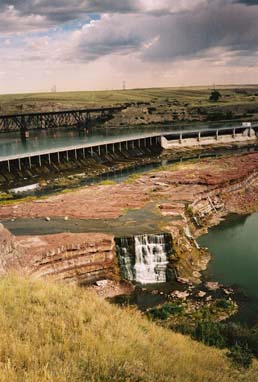 In all, the Missouri dropped three hundred and sixty feet over the series of falls and rapids, within a stretch of less than twelve miles. To further complicate matters, the adjacent countryside was rough and twisted, with ravines and gullies carved and eroded by sporadic creeks into a place difficult to hike, never mind carry all the boats and gear.

Clark wrote: “The men has to haul with all their Strength wate & art, maney times every man all catching the grass & knobes & Stones with their hands to give them more force in drawing on the Canoes & Loads …”, and Lewis added: “… at every halt these poor fellows tumble down and are so much fortiegued that many of them are asleep in an instant … some are limping from the soreness of their feet, others faint and unable to stand for a few minutes, with heat and fatiegue, yet no one complains, all go with cheerfullness.”

In the end, the captains and their crew spent a costly month in the vicinity of what would later be Great Falls, and hauled everything eighteen miles overland to where they could again float their boats and resume their progress to the Rockies and beyond.

Though certainly not as “fortiegued” as those brave explorers, Lorie and I take a site in the KOA campground on the outskirts of town and gratefully settle into the frothy hot tub.