In the morning we drive down to the river and try to see it through Lewis and Clark’s eyes. It’s not easy, as all the falls and rapids are now dammed, so the several falls which Lewis estimated were second in grandeur and beauty only to those of Niagara are now either bone-dry or completely submerged. Nonetheless, we follow River Drive along the south bank to the Lewis and Clark Interpretive Center, where one could spend the better part of a day learning more about the intrepid explorers. 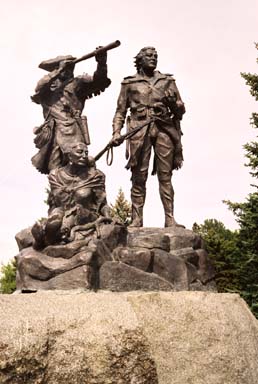 Toward noon we head east across the vast open prairie and descend into the cool green river town of Fort Benton. Founded in 1846 as a trading post and collection point for furs and buffalo skins, Fort Benton was at that time the only white settlement in the region, and has since been called the “Birthplace of Montana.” We park the Westy on the levee, right on the bank of the Missouri, and stroll the old downtown.

Back in the day, the rough-and-tumble town of Fort Benton was little more than a frontier camp of trappers, miners, traders, bull-whackers, and mule-skinners, with a few hurdy-gurdy girls just to keep things interesting. The odd assortment of saloons, gambling halls, and brothels was often a scene of whiskey-fueled brawls and gunfights, leading some to call this section of Front Street the “bloodiest block in the West”.

Sometime between then and now the streets got paved and the citizenry settled down, but not much else has changed. The old Grand Union Hotel, which once boasted: “Finest accommodations between Minneapolis and Seattle,” is still the centerpiece of the levee, and Front Street is still lined by saloons, diners, and hardware stores.

We drift into Bob’s Riverfront Restaurant, a place where local ranchers mingle comfortably with septuagenarian tourists disgorged from tour buses and RVs, and where the salads are comprised entirely of iceberg lettuce. Lewis and Clark paddled up through what would later become Fort Benton in 1805, and several of the expedition’s members are honored on the menu here. Hungry history buffs can choose from such commemorative entrees as “John Ordway Orange Roughy”, “Charbonneau’s Chicken Teriyaki”, or the tempting “William Clark Corn Dog and Fries”. 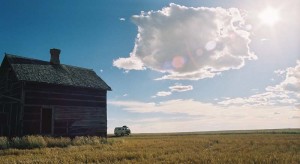 After lunch we cross the river and drive southwest across a prairie of interminably infinite proportions. I’m not generally agoraphobic, but on some of these long drives across beautiful, endless wheat fields, with fuel stops one hundred fifty miles apart, where the crest of every small hill only reveals twenty more miles of flat land in all directions, I kind of get the heebie-jeebies.

Today we see a farmer walking in the middle of a field, his jacket flung over his shoulder, headed away from the road into a golden landscape that never ends. The only house or farm is miles away in the hazy distance, and there is no broken-down tractor or pickup nearby. He doesn’t wave frantically or even acknowledge us. I have no idea where he has come from nor where he is going. He is like a man walking on the surface of the moon, with no ride home. I still get a little sweaty just thinking about it …

Jutting over two thousand feet above the surrounding plains, we can see the flat-topped Square Butte for many miles before we finally arrive at its tiny namesake town. We follow the single gravel road through the sleepy hamlet and nearly to the base of the butte, its flying buttresses and carved sides an evocative sight in the afternoon light.

As we head back out to the highway, we are waved over by a woman mowing the parched lawn of her old schoolhouse, and we stop to chat for a while. In the span of twenty minutes we get a colorful slice of life on the Montana prairie. The woman says she’s lived in the area all her life, used to earn her livelihood flying cropdusters, and will rent rooms in the schoolhouse for the night. When Lorie admires her chickens, she complains that she must now keep them penned up to protect them from neighbors’ dogs.

“This whole presidential election thing comin’ up is mostly irrelevant to me,” she says, waving it away. “Around here, all the politics are about my chickens, and other people’s dogs runnin’ loose.” We move on, and agree to take her up on her offer of rustic lodging the next time we pass through Square Butte.

Driving through a dramatic landscape of increasingly rolling hills, valleys, and weather-carved mesas, we make a side trip to look for yet another ghost town, but find little more than a small decommissioned Air Force installation dating from the 1960s. Numerous barracks and bunkers, underground control stations, and abandoned missile silos are scattered throughout the region, leftovers from the Cold War. 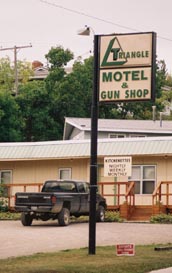 Triangle Motel & Gun Shop: “Sorry, we have no complimentary coffee or continental breakfast here, but be sure and grab a handful of .45-caliber, hollow-point, flesh-rippin’ bullets from the big bowl at the front desk.”

According to a declassified Strategic Air Command report, in the early morning hours of March 16, 1967, several Minuteman missile installations in the area reported seeing UFOs hovering outside the base fences or directly above the launch silos. Entire crews of maintenance and security personnel at two of the sites saw glowing red, saucer-shaped craft, hovering silently immediately outside the front gates.

Controllers watched their monitors in horror as, one by one, over two dozen nuclear ICBM missiles were mysteriously deactivated and removed from strategic alert, making them unlaunchable. At least one security officer was so affected by his close encounter that he never again returned to missile security duty.

We see no such flying saucers on our brief visit to the Judith Mountains but are taking no chances, so before darkness falls we drive down to Lewistown and get a room. After dinner we take an evening stroll down a charming Rockwellian Main Street, taking in the vintage neon signs and trying to stay out of the way of the two drunks stumbling from the Eagles Club to the VFW Hall.