Over fresh-made huevos rancheros and breakfast burritos in a Mexican diner in Pueblo the next morning, we write postcards to friends and pore over our maps. Today we will turn westward and enter those mountains which until now have only been obscure and distant peaks growing ever larger on the horizon. Retracing our route of yesterday, we continue south on I-25, and swing off at Walsenburg to take Colorado State Hwy. 160 west into the Sangre de Cristo range of the Rockies. The stone-faced, snow-capped pyramids loom ever larger before us until the highway begins a long, winding climb. The engine temperature holds steady today and we soon find ourselves at the summit of North La Veta Pass—9413’ ASL. There is little time to enjoy the view, as the pavement quickly begins its descent and we pick up speed for the cruise downward.

A unique set of climatic circumstances has created a singular place here: Great Sand Dunes National Monument. Westerly winds sweeping across this broad plain were once able to pick up and carry vast quantities of the fine sand which comprised its surface, until they came to the base of the Sangre de Cristo mountains. The wind raced upward on the western slopes but, unable to loft the sand up and over, dropped it at the foot of the mountains. Collecting here over several thousand years, the sheer volume of sand is incomprehensible, the dunes covering over 40 square miles and rising to 750’, the largest in North America. Though present conditions no longer deposit sand, the dunes are still relentlessly shaped and changed by the winds. 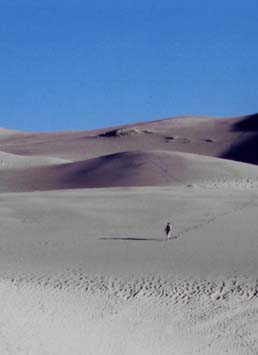 In the beautiful, newly redesigned campground we choose a nice cozy site bounded on one side by pinyon and juniper, with a view of the nearby dunes and the mountains on the other. Tawny mule deer traipse through the campsites, grazing on the greenery. After a quick lunch in camp we drive down to the trailhead and venture out onto the vast sand sheet at the foot of the dunes. The sheer immensity of the dunes is not truly appreciated until we have walked toward them, and walked, and walked, their golden waves and ripples and crests rising higher and higher to fill the sky before us.

Later that evening around the campfire, the moon makes a brief appearance shortly after sunset, then chases the sun over the distant San Juan mountains. As the fire subsides to embers, a brilliant shooting star streaks across the darkened sky, east to west, trailing blue and green sparks that shimmer and almost audibly crackle. Perhaps it points the way to our continuing journey westward …