The Westy gives us trouble this morning, but of another kind; repeated attempts to start her fail to produce anything but clouds of smoke. Finally rolling silently out of our campsite and down the hill, we pop the clutch and the engine fires right up. Once warmed-up, the van performs flawlessly the rest of the day–and will continue to do so every day after that–except requiring a similar rolling start most mornings. This is usually little more than a persistant inconvenience, but in those morning locations without a suitable hill, an old-fashioned manual push-start is called for, which is a discouraging way to achieve one’s daily workout.

We leave Great Sand Dunes about noon, again swing west on Hwy. 160, and enjoy lunch at a picnic table beneath cottonwood trees in a grocery-store parking lot in Alamosa. In the branches overhead, raucous and hungry crows await our leftovers. We leave town and get a running start for our climb to the Continental Divide. 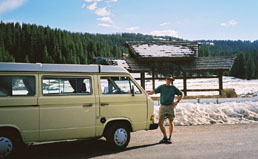 The highway shifts upward and we begin our ascent, climbing up at steepening angles along one side of the valley leading up to the pass. Downshifting through the range—fourth gear, third, sometimes even second—we eventually settle into a low-gear, slow-speed climb, Pass Creek coursing down the steep, rocky gorge. Higher and higher we climb, every curve revealing yet more elevation to be gained, engine thrumming, ears popping. Even our can of Pringles potato chips threatens to blow its freshness seal. Patches of snow grow larger and closer together until the ground is covered by the white stuff. Finally the grade lessens, the road gradually levels and we suddenly find ourselves at the summit of Wolf Creek Pass—10,850’ASL.

This is the Continental Divide, the very backbone of North America, rugged and raw and exposed. Like the peak of a roof, all lands east of here drain to the Rio Grande, Missouri, and Mississippi Rivers, eventually emptying into the Gulf of Mexico in the Atlantic Ocean. All parts to the west flow to the Colorado, Columbia, and other western rivers which pour themselves into the Pacific. At the top of the pass there is a vehicle turnout and a plaque marking the place.

We pause here and disembark to stretch our legs, shoot snowballs at one another, and enjoy the moment. I notice that at one end of the turnout, the snowmelt trickles down the road back the way we came, while at the other end of the turnout, the meltwater runs down the pavement in the opposite direction, to the west. One single snowbank melting into two distant and separate oceans … 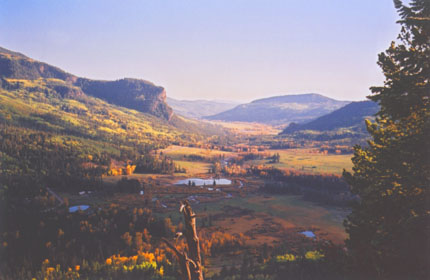 Clambering back in the van, we roll down the 7- and 8% grades on the western side of the summit road, descending into a beautiful mountain valley laced on both slopes with pines and aspen in full autumn color, and shortly after dark arrive in Durango, CO. Having spent the last few nights sleeping in the camper van at various campgrounds and Wal*Mart parking lots, we splurge a bit and take a room in a good hotel and enjoy dinner downtown before retiring.