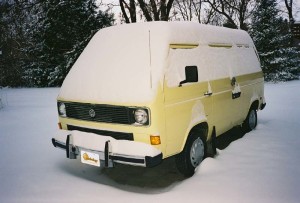 Here in the Great White North, we know a thing or two about operating cars in cold weather.

In fact, my Wisconsin hometown (just one or two tankfuls from Canada) suffers January average temperatures several degrees colder than that of Hannover, Germany, birthplace of our beloved VW Vanagons.

As a child, riding in a car with air conditioning was a novelty for me, but every kid recognized the black electrical plug of an engine block heater dangling from the front grill of most cars around here.

An engine heater is an electrical accessory installed in an engine, with a heating element intended to pre-heat the engine before starting in very cold weather.

All engines have difficulty starting when very cold, as lubricating oils are thick and viscous, and tolerances between parts are tight. Cold starts are hard on engines, causing extra wear on poorly lubricated parts and stressing seals and gaskets.

Diesel engines in particular, with their much higher compression ratios, can be notoriously difficult or impossible to start in cold temperatures, and can suffer significant internal wear and damage. Diesel trucks and other equipment working on the Trans-Alaska Pipeline of the far north are often left to run 24/7 in the winter months, rather than risk the difficulty and damage that can result from re-starting in extremely cold conditions.

Additionally, besides easier starting and greater longevity, pre-heating an engine means you’ll have heated cabin air much sooner; nice on a cold winter’s morn. So, all engines can benefit from any means to pre-heat them before starting in very cold weather.

There are four primary types of engine heaters that run on standard 120-volt AC power, and contain a 250-600-watt heating element. Some are better suited for your Vanagon engine than others: 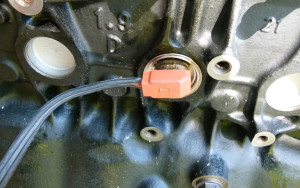 These typically install directly into a port in the engine block itself, usually replacing a core plug (sometimes erroneously called a freeze plug, or frost plug). Core openings are left in the engine block during the sand-casting manufacturing process, usually opening to the internal water jackets; plugs are installed at the factory. Such a plug can be removed from the block and replaced with a heating-element block heater (see instructions below), to pre-heat the coolant for a few hours prior to cold-weather starts.
VW inline-four engines, including the diesels, work best with such block heaters. 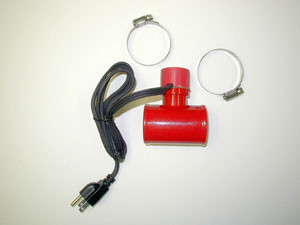 The waterboxer engines most commonly found in Vanagons lack core plugs, so require a heater which can be installed in a coolant hose. Essentially, a short section of coolant hose is removed and the heater installed in its place. Ideally, the heater is located low to facilitate upward convection of heated coolant, while cold coolant flows downward to be heated. 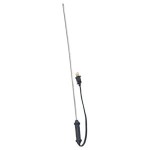 These temporarily replace the engine oil dipstick with a long heating element to pre-heat the oil where it rests in the pan. They are, of course, removed before starting the vehicle. I have no experience with this type, and have heard reports of early failures.

Lacking such heaters, an engine can also be pre-heated by placing a halogen work light beneath the oil pan or engine block for a few hours before starting, or even a high-wattage incandescent lamp. In a pinch, a campstove or a can of Sterno fuel can be carefully burned beneath an engine to warm it. These methods will be helped by tucking a blanket over the engine to retain any heat while warming.

Installation of a Block Heater

For the diesel engine used in some VW Vanagons, or if another inline gasoline engine (Jetta, etc.) has been installed, the best choice is a core-plug block heater. For the most uniform heating, the heater should be installed in the center core opening. This job is perhaps best done in conjunction with a bi-annual coolant change, since it requires draining and replacement of the coolant. 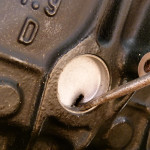 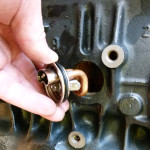 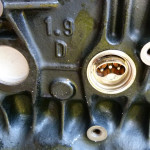 NOTE: the wise Westy traveler will carry a spare block heater or spare standard core (freeze) plug on the road, in case of the urgent need to replace a lost or leaking block heater.

Depending on the condition of your engine, and its cold-starting abilities, you may want to use a block heater before starting at any temperatures below freezing. It can take 3-4 hours to thoroughly pre-heat a 300-400-lb cast iron engine block in cold weather, so I suggest you connect the heater to a breaker-protected power supply through a programmable timer, capable of handling the 250-600-watt draw. In this way, the heater will start pre-heating your engine a few hours in advance, and will be ready when you are.

What do you think? Leave a question or comment below, and use the social links to share with friends!

Replace the Vanagon Cigarette Lighter with a USB Port

We are a participant in the Amazon Services LLC Associates Program, an affiliate advertising program designed to provide a means for us to earn fees by linking to Amazon.com and affiliated sites.