A Superior State of Mind, Day 1

A thousand-mile circumnavigation of the world’s largest inland body of water, Lake Superior, our route taking us through three US states and the Canadian province of Ontario.

“I had with me a youth (Etienne Brule) who wanted to … see the great lake, take note of the rivers and the peoples living along them; and discover … the most curious things about those places and peoples …”
Samuel de Champlain, Great Lakes explorer, 1610

We are a nation of explorers.

North America was one of the last major land masses of the world to be found by early European voyagers, and even after her coasts had been well charted, her interior remained shrouded in mystery to the developed world for centuries.

More than a hundred years after Columbus stumbled onto what he believed was India, French explorers were only beginning to make their way up the St. Lawrence River to discover the seemingly endless waterway which beckoned them ever westward. Even as recently as the Lewis and Clark voyage of discovery, many believed that deep in the American interior dwelt the long-lost tribes of Israel, veritable mountains of salt, and wooly mammoths and other prehistoric beasts.

Forming nearly a third of the contiguous US border with Canada, the Great Lakes and St. Lawrence comprise by far the largest chain of inland lakes anywhere in the world. Certainly, the grandest of these is Lake Superior.

Drawn to the mystique and beauty of this place, we plan to travel around her entire body—350 miles long and 160 wide. Sticking close to the shore for most of the way, our thousand-mile circumnavigation will take us through three US states and the Canadian province of Ontario, camping along the way.

Join us as we embark on this Superior roadtrip …

After breakfast in camp this morning we set sail on a northerly course along US Route 51 to Ironwood, straddling the border with Michigan. We swing west on our old friend US Route 2 and the trees soon part like a green coniferous curtain to offer our first glimpses of Lake Superior. The native Ojibwa people knew her as Kitchi-gummi, “Great-water” or “Great-lake”, while the French called it Le Lac Superieur—”Upper Lake”. Superior is indeed the largest freshwater lake in the world, covering over 30,000 square miles and containing an almost incomprehensible 3,000 cubic miles of water, enough to entirely flood all of North and South America to a depth of nearly twelve inches. At 600 feet above sea level, it is the highest of the Great Lakes chain.

So large and cold is this vast inland sea that it often generates its own weather systems, cooling nearby regions by several degrees and annually dumping as much as twelve to fifteen feet of snow on towns here along her southern shore. Warm summer weather blowing in off the golden wheat fields of the upper Great Plains, upon encountering the cold mass of Superior, often turns to violent, windy thunderstorms which send powerful waves crashing onto her rocky coasts.

The sheer visual weight of Superior is dramatically contrasted by the dense and dark forests surrounding her, and we find our eyes drawn to and held by the vast open sky above her. We continue west on Route 2, the rocky and pebbled beaches scrolling past the Vanagon’s windows, and we soon pull into the old mining and lumbering town of Ashland.

The Ojibwa had lived and prospered on Chequamegon Bay for thousands of years when the first whites beached their canoe here in 1659. Famed French explorers Radisson and Groselliers erected a small stockaded cabin, generally regarded as the first European settlement in Wisconsin, before continuing their search for furs in the lands west of Superior. It would be nearly 200 more years before white settlement began in earnest, when a couple of adventuresome fellows from Ohio built a cabin and began raising their families here in what would later be called Ashland.

We continue west on Route 2 for a couple miles and stop at the Northern Great Lakes Visitor Center. After popping the Westy top and fixing soup and sandwiches in a quiet corner of the parking lot, we go inside to take in the enlightening exhibits regarding the natural and human history of the region. The Center also offers an enclosed, four-story observation tower which offers panoramic views of the Ashland harbor. 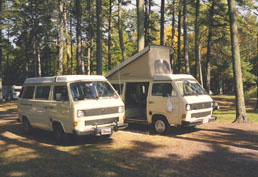 Twins separated at birth? After this happy reunion, the two Westfalias frolicked in a nearby meadow, scampering around in circles and sniffing one anothers’ tailpipes.

It is only a short jaunt northward on Hwy 13 to Washburn. A bit fatigued by the late drive last night, we decide to stop for the evening at a small municipal campground overlooking Chequamegon Bay. No sooner do we settle into a site and enjoy a walk along the water’s edge than who should motor through the campground but our Westy’s spittin’ image—a 1982 diesel Vanagon, owned by a friendly couple from Minoqua, where we camped last night. After the requisite greetings, they invite us over to their site after dinner, where we chat and swap travel stories.

Having previously owned three Volkswagen cars (and at various times vowing I’d never do it again), I knew when we bought the van that we were joining an elite and eclectic community. But we didn’t expect to be so warmly embraced as we’ve been as owners of a VW Westfalia Camper. Wherever we go, hippies beep in their rusty old Type 2 Busses and retired couples flash the lights of their shiny VW Eurovans. Every random encounter in a grocery store parking lot or campground becomes an opportunity to exchange pedigrees and swap Westfalia Camper tips. As it turns out, Westy-owners are a cult within a cult.

Later, we swing by the grocery store for some forgotten supplies, then across the street to the self-proclaimed “World’s Only Underground Dairy Queen”. Viewed from the front, one might easily mistake this popular ice cream joint for a Dairy Queen of the more usual, superterranean variety. But closer inspection reveals that this DQ is either: a) indeed built into a small hillside, or b) a regular DQ which a disgruntled bulldozer driver has attempted to bury beneath tons of dirt, for reasons unknown. After all, who can fathom the dark and tortured soul of an unhappy heavy-equipment operator?

Sitting at the picnic tables under the shade trees, we savor our sundaes and ponder this mystical edifice of soft-serve.

A Superior State of Mind, Day 9

A Superior State of Mind, Day 11